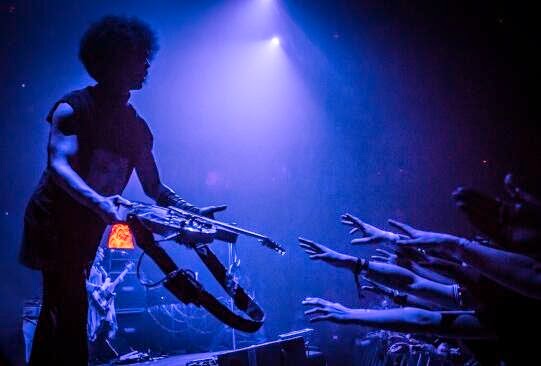 It’s become a familiar sight in London in the past few months: an undulating line of people, snaking down through the street from the door of [insert name of famous music venue far too small to be hosting a show by the likes of Prince here], all elbows and anticipation as they jostle to catch a glimpse of the legendary artist in action.

Part Two of his guerrilla series of live dates – aptly named the ‘Hit And Run’ tour – paints a similar picture. This time, fans were given just 48 hour’s notice to descend upon the Roundhouse in Camden for one of two separate shows this evening, both of which sold out just four minutes after going on sale.

And those lucky enough to get their cyber hands on tickets certainly get their money’s worth. From the moment The Artist steps onto the stage, clad in a gold lamé smoking jacket and flanked by his equally glamorous all-female backing band 3rdEyeGirl, he sets into motion a seemingly endless medley of hits that blend into one silken performance of funk euphoria.

From the thunder clap start, it takes just two tracks and a squealing solo before the crowd are drawn deep into the neck snapping rhythm of “Raspberry Beret”. Intense synths accompany a sing-a-long rendition of “C.O.O.L”, punctuated by some impressive pirouetting, as the familiar keys of “When Doves Cry” plunge the Roundhouse into arm-waving hysteria.

Tossing his guitar to one side, he climbs behind the keys for an emotive, stripped back rendition of “I Would Die 4 You”. “Controversy” and “Play That Funky Music” follow to rapturous reception, heightened to fever pitch with an up-beat instrumental interlude, “1999” and an overtly sexual, banter-laced performance of “Little Red Courvette”.

“Nothing Compares 2 U” tugs neck hairs the room over, soon flattened back into position by a gyration-fuelled version of “Kiss”. The panic of the first encore is soon subdued as, now wearing a sleeveless black vest, Prince bounds back onto the stage for “I Could Never Take The Place Of Your Man”. “We love you London, but not like we love these guitars,” he shouts, before diving into another anthemic rock instrumental. Shade is provided back behind the keyboards with “The Beautiful Ones”, as the stage is bathed in indigo and lilac for a special, extended version of “Purple Rain”.

After one-and-a-half hours of non-stop classics, many assume this to be the end, and although delighted, are mildly bemused by the striking up of a second encore. It’s about this time that the venue security beef up the evening’s somewhat aggressive ‘No photos, no videos!’ policy. Several quivering young audience members attempting to snap a keepsake on their mobile phones are rooted out and ejected from the venue by the arm in an almost military operation that adds an unsettling undertone to the evening’s otherwise upbeat mood.

The set finishes with a solo-heavy version of “She’s Always In My Hair”. At the end of the song, Prince struts off stage, only to return laden with a bunch of helium-filled balloons, which promptly travel up to the roof as he attempts to throw them out into the crowd. “It just… Really doesn’t get any better,” a near-by reveller reviews to a friend. She was, clearly, not one those caught taking their phones out. But, while her turn of phrase is hideously overused, few statements apply more accurately to tonight’s proceedings.  Ageless, timeless, almost genderless, he remains an inimitable showman, with an emphatic back catalogue that renders the majority of modern solo artists so embarrassingly under-accomplished, it’s almost hard to think of him as a real person.

So if you do see that queue forming at a venue near you, jump in it. Fan or not, it’s an experience that simply can’t be matched.

Most acts spend months promoting their gigs; Prince favours a more  ad hoc approach. Fans of the Purple One were given only 48 hours’ notice of his intention to play two shows  at the Roundhouse last night. It’s called the Hit and Run tour for a reason.

Those who were alert enough to grab a ticket were in for a treat. Backed by 3rdEyeGirl, an all-female band who managed to upstage even Prince in the sartorial stakes, he cherry-picked the classics from his enviable, 32-album back catalogue.

Let’s Go Crazy kicked off proceedings with a mass of heavy-riffing and call-and-response vocals. The joyous Raspberry Beret came next, followed by the staccato synths of When Doves Cry. I feared for the Roundhouse’s foundations during 1999, such was the level of dancing inside the venue, while Little Red Corvette featured one of the night’s many spectacular guitar excursions.

“How many hits was that? Have  I got anymore?” asked the  Minneapolis man, answering his  own question by launching into the slinky funk of Kiss.

Music’s ultimate multi-tasker, he was variously a guitar hero, piano virtuoso, slap bassist and rabble-rouser — sometimes within the same song — and, at 55, remains an impossibly energetic frontman.

Given that he was about to play another show an hour later, he’d have been forgiven for providing no encore. Instead, he threw in two, including a glorious cover of Joni Mitchell’s A Case of You and a  10-minute, show-stealing Purple Rain. Live music simply doesn’t get better than this.

The high octane set for after the premiere of Belle was reportedly done “not for payment” as the artist loved the film and its star, Gugu Mbatha-Raw

King of pop: Prince at the after-party for Belle

Prince threw the after party for the premiere of the movie Belle where he brought the house down by performing for more than 90 minutes. The musician wore a custom-made top printed with the painting that inspired the film for the performance at the Hippodrome Casino. And he paid tribute to its star, Gugu Mbatha-Raw, director Amma Asante and “all the cast and crew” as he ripped through hits including 1999 and When Doves Cry concluding with three encores.

Prince performed for a host of stars including Kate Moss and Bryan Ferry at an intimate gig last night (05.06.14).

Prince performed for a host of stars including Kate Moss and Bryan Ferry at an intimate gig last night (05.06.14).

The ‘Raspberry Beret’ hitmaker, who is on the second leg of his ‘Hit and Run Tour’ of the UK took to the stage with his all-female band 3RDEYEGIRL at London’s Hippodrome Casino in Leicester Square for the premiere after-party for the new movie ‘Belle’.

The gig at the 35-capacity venue was attended by the film’s cast and crew and the likes of supermodel Kate, singer Bryan, Dev Hynes, Paolo Nutini and The XX, who were treated to a mind-blowing set of classic hits from his back catalogue and new songs.

Prince’s show comes hot on the heels of his two sold out performance at The Roundhouse in Camden, London on Wednesday night (04.06.14) where he played two gigs back-to-back for an audience of 6,500. Tickets for the gigs sold out in just four minutes.

The pint-sized singer has also performed exclusive arena shows across the UK, before three shows unannounced in one night at a 400-capacity club in Brussels, after which he headed to Paris to perform at the legendary Le Zenith before returning to London once again.